Tonight I am feeling angry at myself and feeling very guilty...

Why You may ask....Because my dad is in the hospital (ER).

The nursing home said over the past few days said that he has been very "off" and even more lethargic than normal. Aparently he laid his down and they couldn't wake him until they used pain techniques (pinching i think) to get him to stir. I think the pinching technique is used primarily to see if there is any response left in an individual to help assess how far gone they are. He did stir at that but he is getting worse and worse and i know he is going to pass soon.

But i feel guilty...

I'm mad at myself because at this point I almost feel it would be better for him if he did pass away. I know he can't be happy at the nursing home and I see how far his mind has gone. This is a man who could fix almost anything you put in front of him. He was inteligent in that way and very talented at most things. He could take a plot of land and build homes on it by himself... good homes. He could strip a car down to it's bare components and rebuild it better than the manufacturer did when they first put it together. He was a pilot when he was younger (he served in the airforce as a cargo pilot). He was the type of person who always needed something to work on and i know it kills him to not be able to understand who people are or why he can't fix things or have tools...he didn't even really know me or my brothe the last time we visited.

I keep thinking back to all the projects we used to do together. He taught me so many things. Thanks to him i know how to put elecrical throughout a house. Put new plumbing in if needed. He even taught me how to drywal but i'm not that good at it. I tend to suck at the finish work i can hang it fine but i'm not good with the mudding. He also taught me how to repair cars (well i still have problems with trannies but i'm trying) which has saved the family probably tens of thousands of dollars in labor over the past 15 years.

I can now also strip guns down and do most repairs to them as well plus target shooting isn't nearly as expensive now since i can basically reload my old rounds and know how to safely level the loads so people don't end up blowing the guns up (NO HOT LOADS).

I wish he could have taught me to fly but he sold his planes years ago.

He and my brother were not very close because all dad ever did was work. Even when i visited him the visits consited of helping him with his projects or farm work. My brother didn't understand this and since my brother couldn't do the physical stuff like me and dad they didn't get along.

but is still feel guilty.. and angry.. and i miss him and i love him so very much. 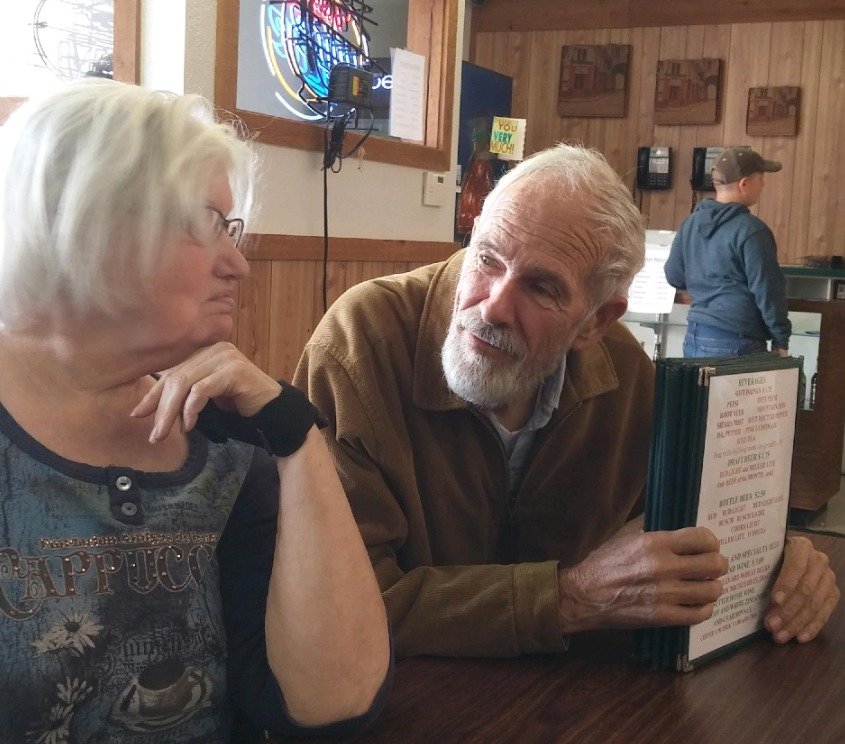 This is my favorite picture of him. It is him and mom breaking bread after 25 years i want to say.

I don't know if god is going to pull him back home yet...i still don't know what is going on. I just hope i have enough time to be able to drive the many hour trip so he isn't alone when he does pass.

I took care of my father till the end, and Dad never went into a home as this was his wish. My father died in the hospital as our family hoped that the doctors might intervened to save his life, but they refused to.

Go and be with your father, and speak to him even though he is unconscious as he can hear you. Patients nearing death often have one last moment of clarity where they become conscious or may sit up and converse with family one last time to say good bye. I think this is the last grace from God. Go and say your good byes, and make peace with your brother so to make your Dad happy.

But sometimes despite of all the farewells, some patients would miraculously recover. Pray to God sincerely and ask him for a miracle. Take care, and I pray to God that your father will recover.

rianbooyer 07/11/2021
UPDATE: He is ok i guess it was medication related but it was a major scare. All the cat scans and bloodwork came back ok. I just wish there was a way i could help him but with his case he has to be continuously monitored. I feel better but still mad about feeling that way.

Andromeda8 07/11/2021
That is great news. I am so glad that your father has recovered. Will you take him back to your home, or let him stay in that nursing home?

rianbooyer 07/11/2021
Unfortunately with his paranoia that has been sent into overdrive we cant handle him at home. Plus his constant need to fix something created some very dangerous situations and we cant watch him 24/7 so he has to stay there... just wish there was something we could do for him.

Andromeda8 07/12/2021
Perhaps that nursing home does not meet the industry standard. Overdosing an elderly person to near death should set warning bells of their negligence, their unprofessionalism, and lack of standards of care. I am certain there are better nursing homes out there. Perhaps you can google nursing homes in your area and read reviews about them, or ring up their union to find out the best one that you can afford.

KimmyO 07/12/2021
Aww, this is such a sad and hard time full of many feelings and you are not a bad person for feeling them. It is so hard to see someone who was so able become so disabled and you know he's not happy or enjoying life. It is normal to feel all the feelings and part of your grief process. You honored him in the things you told of him and your love, and the picture of him. Continue honoring him by your words and deeds and remember the good times. He can probably heal you, you can tell him it is ok to let go and to die, it might free him, he may be holding on, thinking of others who can't handle it and it helps him to know you will be ok. Talk to him of your great memories with him and of the great and helpful things he's said, it will bring him joy in his last moments with you. Im sorry you are going thru this hard time, rejoice in having known him and had him to help you so much! Thank God you had him to help you so much! =)

rmb 07/13/2021
When our parents are aging and also have dementia you kind of go through this grieving process while they are still living. I went through this with my mom who was in her late 60s when she was diagnosed with Alzheimer’s disease. She wasn’t that old but diseases of the brain inevitably affect how the body functions. So you may find your dad could continue to have some instability on and off as time goes on.

For over a year we went through similar situations where it seemed like it was the end and then my mom would rally. This happened on and off until it was truly the end. It is very common, for that to happen, and it is exhausting and confusing.

If I can offer anything, this is the time to try to make peace within yourself, to let yourself off the hook and be ok with just doing the best you can. Say everything you want to say to your dad, even if you can’t say it directly to him. And yes, it’s ok to grieve the loss of the person you once knew. In fact that grieving actually makes it easier to embrace who they are now and eventually let go. I totally understand questioning yourself.

I think what helped me most was just trying to keep my mom comfortable. We were fortunate we did not have to put my mom in a nursing home because my brother and his family chose to be her caretakers. Most families do not have the ability to provide that kind of care. My brother and his wife had jobs that were not traditional 9-5 jobs. If they were, they could not have handled her care as it was a full time job in and of itself. Eventually we had to hire home health care because her needs were so great. Again, not everyone is in a position to hire care. If we had to have transitioned her to a nursing home because we could no longer manage her care, we would have done so because it simply is sometimes the only option that makes sense. So I hope you don’t beat yourself up over that. You are doing what makes sense for you, your dad and your family.

You are a good son. Your dad would be proud of how much you care and worry for him. I think being realistic about the inevitable can sometimes help release all the pent up anxiety and guilt, and that just means there is more room for love, peace and gratitude.

ejwp5911 07/17/2021
Rian, hope you are doing something for yourself through all this scare. You need to take care of you because you can worry about dad and mom. Reach out if you need to chat
Join the Conversation
Posts You May Be Interested In