What’s the Deal With Burdock Root

Arctium, or better known as burdock, is a flowering plant that has been a major part of various cultures for more than hundreds of years. Its root is known in Japan as gobo and used in their cuisine. The North America Iroquois tribe dried and preserved the root for food during the winter.

The burdock seeds were used in Ancient China to treat various conditions such as cough, fever, sore throat, arthritis and various digestive diseases. 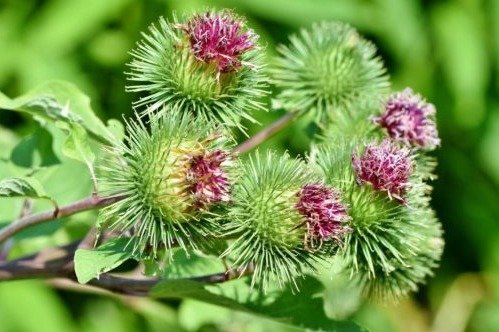 Burdock can reach a height between 1 and 2 meters when fully grown and produces purple flowers that extend away from its bracts that bloom between June and October. This plant is native throughout Europe and Asia and introduced in America during the 1600’s by English settlers and noted by English traveler John Josselyn in 1672. At this period of time the settlers introduced burdock to the Iroquois and it then also became a part of their culture.

The catalyst for the invention of Velcro was burdock. Swiss engineer George de Mestral was hiking in the Jura Mountains in Switzerland in 1941 when he noticed his pants and his dog’s fur became covered in burdock seeds. His curiosity was peaked as to how these seeds stuck to his pants. He discovered they were covered in small interlocking hooks that can cling to fabric, the idea that he patented and eventually became known as Velcro. This product is still used in countless products around the world.

Some different uses of burdock root are to use them in stir fry, eat them raw for a quick and nutritious snack, use them in broth for vegetable soups and pickle them in apple cider vinegar to preserve the shelf life. Burdock root can also help to maintain healthy skin and hair. It contains antiseptic and anti-inflammatory properties that can provide relief for conditions like psoriasis, eczema, skin ulcers and acne and can also help prevent hair loss by treating dandruff and maintaining a healthy scalp.

You can use burdock in a multitude of dishes, but it is known mostly as an ingredient for tea. Use burdock as an essential oil with the benefits mostly associated with the skin and scalp. Burdock oil contains vitamin A and various essential fatty acids that help to nourish your scalp and promotes healthy hair growth. Relief from infections and irritations caused by dandruff can also be provided by burdock oil as it helps to keep sebaceous glands and hair follicles healthy.

There are some side effects that you should be aware of. There is a small chance that it may increase your blood sugar levels, so it’s best to avoid it and use other healthy alternatives instead if you are diabetic. You should be sure to check for any topical irritations by performing a skin patch test on your arm. Consult with your doctor before using this oil to avoid any other possible health complications.