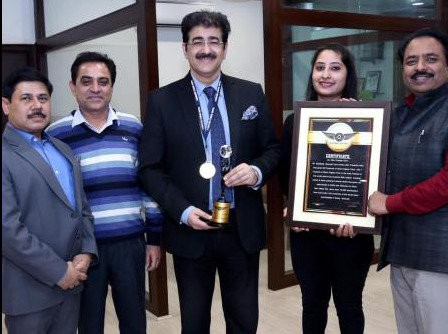 New Delhi: Sandeep Marwah from Uttar Pradesh had created new Vajra World Record by covering 19th Queens Baton Relay from Wagah Boarder to Jawahar Lal Nehru Stadium, New Delhi by covering 28 states 5 Union Territories, 20,000 kms., 300 events, 900 cities clicked 10,000 pictures, 1000 Hours film making, 102 Radio Programs, 102 Short films in 102 days for World Broadcast- published by Vajra World Records.
The idea of this kind of book strings together ‘Indian’ achievements originated in 1989, The objective was simple- to provide a platform to ordinary Indians to showcase their talent in their search for excellence. It was difficult then to ferret out details from people for an entity that did not exist. The Vajra world records using and thrilling but also inspiring and informative.
“I am excited that my World Record has been entered into the books of Vajra World Record. I feel so satisfied,” said Sandeep Marwah President of Marwah Studios on receiving appreciation and approval from Vishakapatnam.