The most common cause for heel pain is plantar fasciitis. This condition is classically known for causing pain in the heel at the first step in the morning. The pain can be so severe that many will limp, or grab onto a wall during the first few steps in the morning. The pain will generally work itself out after 15-20 minutes of walking, but usually returns with a vengeance by the end of the day. Although this is the classic description of plantar fasciitis, it is not the only presentation of this condition. Some individuals will only experience pain in their heel when they run, walk or hike. Others will only experience pain in the arch after long periods of standing. Many people will complain only of pain in their heels at the end of a long workday. Classic descriptive terms for plantar fasciitis include stone bruise, sharp dagger, deep throbbing and dull ache. 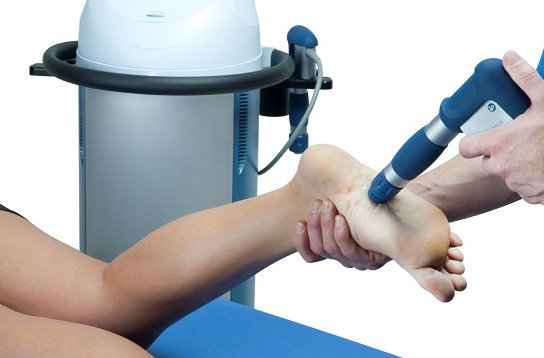 Plantar fasciitis is the microscopic tearing and inflammation of the plantar fascia, which is a long ligament on the bottom of the foot. A spur can develop as a result of the pull of the fascia, but it is rarely the cause of pain. This condition is also referred to as "heel spur syndrome". There are many treatments for plantar fasciitis, including stretching, icing, physical therapy, orthotics, night splints, steroid injections, shockwave therapy and surgery.

The term shockwave therapy usually makes people jump. No, this is not electric shock therapy. It is extracorporeal shockwave therapy (ESWT). Shockwaves are sound waves that create vibrations and cause controlled injury to the tissue. In this case, the plantar fascia and the surrounding structures at the heel. The body responds by increasing it's healing ability at that area, stimulating a repair process. The FDA approved ESWT for the treatment for plantar fasciitis in 2000, but it still remains under investigation and many insurance companies will not cover this treatment.

The procedure is typically done at a surgery center and in some cases involves using anesthesia or some sedation. Full healing time after the procedure generally takes about three months. There are very few complications associated with ESWT, but a few that have been reported include bruising, hematomas, skin erosion, swelling and paresthesias (abnormal nerve sensations).

A recent Study in the Journal of Foot & Ankle Surgery compared ESWT versus a sham procedure in 172 patients. The researchers found a statistically significant benefit of ESWT over the sham treatment and the patients experienced no significant complications or side effects.

The 172 participants were divided randomly into two groups, a control group and an active ESWT group. The ESWT group included 115 patients with plantar fasciitis and underwent shockwave therapy. The control group included 57 patients with plantar fasciitis who had a sham treatment. All patients were brought into the procedure room and The Orthospec (ESWT device) was used to apply shockwaves to the heel area. The placebo group had a foam membrane placed against the heel to absorb the sounds waves, while the active ESWT group had only a contact membrane on the heel. The procedure lasted 25 minutes for both groups. Although the administrator of the shockwave therapy was not blinded, the investigators evaluating the patients, before and after the procedure, were blinded.

In this study, there was only a single treatment of shockwave therapy and no local anesthetics or systemic analgesics were used during the procedure. There were no serious adverse events during the trial, but some complained of bruising at the heel and swelling.

Previous studies of ESWT for plantar fasciitis have had conflicting results.
There is still continued debate over many issues surrounding ESWT: shockwave dosage, high-versus low-energy ESWT and the number of sessions required for a therapeutic effect. More studies, including the one reviewed here, are emerging with evidence which points to ESWT as a safe and effective treatment for plantar fasciitis.