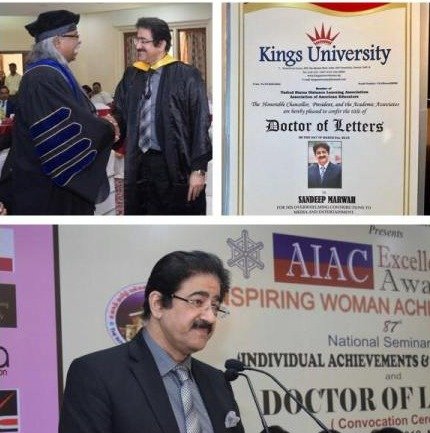 New Delhi: Five World Records in Media, and pioneer in many fields Sandeep Marwah President of Marwah Studios, receives his honorary Doctorate from Kings University, USA as a gesture of recognition of his untiring efforts in the film, television and media industry.
Sandeep Marwah has already been titled as Global Cultural Minister, Global Peace Ambassador, Global Green Ambassador and now Global Media Guru declared by the Kings University, USA while reading his citation.
Sandeep Marwah is the founder of Noida Film City-the fastest growing film city in the World, Marwah Studios-the first professional film studios of North India, Asian Academy of Film And Television- the first private film school of the country, Marwah Films And Video Production-The producers of largest number of short films in the World, International Film And Television Club-Designers of largest number of festivals in the World and founder of first ever dedicated Chamber of Media And Entertainment Industry.
Sandeep Marwah is recipient of more than 500 awards including 100 international awards he has brought to India. He has been recognized as the Father of Cellphone Cinema. Marwah has been nominated as Chair for India Skills Development Council and National Federation of Tourism And Transport Cooperatives of India Limited. He has represented Indian Media And Entertainment Industry in many international summits as state guest.
Sandeep Marwah is teacher to 12000 media professional hailing from 120 countries of the World. He has been associated with 4500 television program, 125 feature films, and 5000 training films. Marwah is chairing more than 100 national and international organization related to films, television, media, fashion, management, social and cultural promotions.
“We are proud to present the honorary doctorate to Sandeep Marwah for his overwhelming contribution to media and entertainment,” said Dr. Salvin Kumar Founder and President of Kings University, USA in a grand function at Hotel Samrat, at New Delhi.
I am charged with new energy and this gesture by Kings University has given me new blood to work more and differently for media and entertainment industry. I am here to help and support all those who are keen in making their space in this glamorous World,” said Sandeep Marwah thanking the University for the honorary doctorate. The event was attended by people from all strata of life including press and media.