Agriculture is the main source of livelihood, but the post-harvest losses cost Africa $4 billion per year. On the other hand, mobile usage, internet penetration, and mobile money is fuelling e-commerce growth. But, is African logistics infrastructure ready to capitalise on Africa’s full potential? Nahida Jafferi reports. 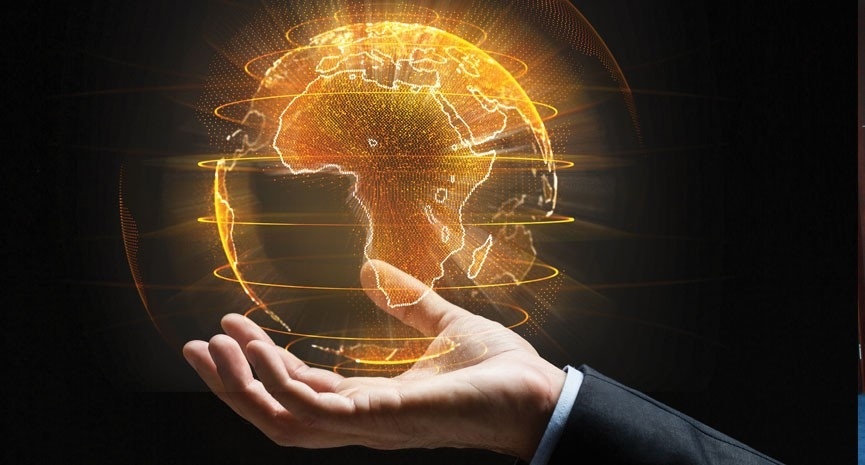 Logistics infrastructure is imperative to unlock the economic space, and Africa needs finance for a good logistics system. Also, the continent needs to diversify the economy to be successful. 65 to 70 percent of Africans makes a living through agriculture.

Today, the biggest revenue source for logistics providers is retailers. On average, the cost of transportation in Africa is 50-75 percent of the retail price of goods, which is two to three times higher when compared to developed countries.

Africa’s 54 countries boast resources like diamonds, sugar, silver, gold, cocoa, flowers, oil and petroleum, among others. Oil exports have placed Nigeria and Egypt at the top in terms of Gross Domestic Product (GDP).

Nigeria is the wealthiest economy of Africa, followed by South Africa, Egypt, Algeria, and Angola. However, most African economies have surpassed Nigeria in the Logistics Performance Index (LPI) 2018 where it ranks 110. Despite being the top performer in the continent, South Africa retreated from 20 out of 160 in 2016, to 33 out of 160 in LPI 2018. Logistics performance is vital for a country's economic growth and refers to cost, time and complexity in accomplishing import and export activities. 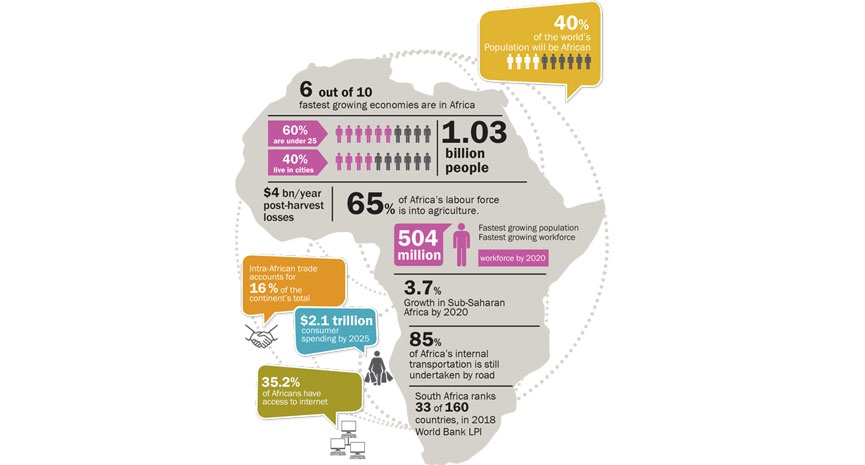 The City of Ekurhuleni in South Africa has approved Africa’s first aerotropolis that will be a special economic zone within a 30 km radius of the O.R Tambo International Airport. The 30-year master plan includes economic hubs will be created for different industries, such as manufacturing and hi-tech industries, agribusiness and food processing, logistics and distribution, among others.

“Initiatives to stimulate growth and economic development include frameworks for Special Economic Zones to enable further growth. The aim is to bring more business, people and goods to South Africa as well as to share South Africa’s products and resources with the world,” stated Bongiwe Pityi-Vokwana, General Manager, O.R Tambo International airport.

African e-commerce gathers steam
The recent GSMA Mobile Economy report indicates that more than half the population of Sub-Saharan Africa (SSA) will be subscribed to a mobile service by 2025. It also predicted that mobile broadband will account for 87 percent of mobile connections in SSA by 2025, up from 38 percent in 2017.

Report by McKinsey & Company observes that one in 10 African adults have active mobile money accounts, making it the global leader in mobile money. 61 percent of e-commerce sales in Ghana are carried out with mobile money.

Nearly 40 percent of Africa’s e-commerce ventures are located in Nigeria, the continent’s largest economy and most populous nation. Jumia Group | Jumia Expand Your Horizons that has a presence in 11 African markets, is betting big on Nigeria as its base for expansion.

Xavier Personnic, Head of FMCG and Retail, Bolloré Transport & Logistics, said, “Jumia is the best example of a multi-countries player addressing all online models, such as local online retail, local marketplace and international marketplace. We are also one of their preferred partners for international freight forwarding owing to our logistics capabilities.”

Many retailers or even some FMCG companies test their brand and category on e-commerce sites across Africa, especially European ones (French and English speaking African countries).

Personnic said that Bollore’s 90 percent e-commerce shipments in Africa are routed through the air, and its upcoming stock consignment solutions for e-commerce will enable to shift from air freight to sea freight, flexibly.

Ivory Coast, Nigeria, Democratic Republic of Congo, Kenya, Cameroon, SA, and Morocco are the African markets that are performing best for Bolloré Transport & Logistics. “Bollore generates an average 1500 orders a week from Ivory Coast, making it the largest operations in Africa. The e-commerce revenue of Bolloré is still marginal versus brick and mortar retail freight forwarding and logistics operations,” said Personnic.

Unlike e-commerce firms in other countries who rely heavily on national postal services, Africa has to rely more on global express delivery services. Personnic opined, “It actually depends on countries. However, in SSA (South Africa is an exception), postal services don’t have the maturity to handle it. Indeed, major e-commerce players’ offer owned capabilities combined with postal services, when available. They are interested in the capabilities of our express delivery services. Cameroon is one example.”

Due to the stability in central African countries, in addition to internet and telephone penetration, Kenya has also witnessed a growth in e-commerce. Daniel Salaton, Manager-Express & e-commerce, Kenya Airways Cargo, said, “We have experienced growth in our express and e-commerce portfolio due to our deliberate focus on this segment.”

“In Kenya, road transport is preferred partly due to the cost involved and a lot of capacity offered by the bus operators. The main challenge is to transfer goods cross-border to landlocked countries for last-mile delivery. Mostly it is cheaper to fly goods from one African country via the Middle East to another African country than directly between two African countries,” added Salaton.

Kenya Airways Cargo has developed a modern express centre, arguably the first in Africa, with a 24-hour dedicated team that focuses on speed and service. Salaton informed, “We launched our state-of-the-art Cargo Express Center with e-commerce in mind. We are one of the few airlines in the world that achieve a 45-minute transit time for connections ex-Nairobi hub. We have as well engaged our government agencies to work 24-hours and that facilitates the clearance of inbound material.”

Agricultural trade
Most of Sub Saharan Africa's rural population has to travel five hours or more to reach the nearest market. In addition, the lack of storage infrastructure leads to estimated post-harvest losses of 21 percent for grains and 50 percent for other perishable products. These post-harvest losses cost Africa $4 billion per year, according to Food and Agriculture Organisation (FAO). 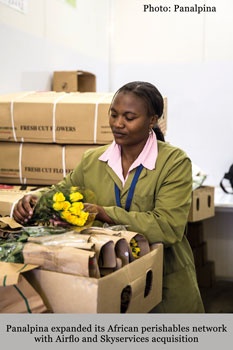 The report “Africa Cargo week 2017” by Economic and Social Council (ECOSOC), United Nations (UN), showed that agriculture employs 65 percent of Africa’s labour force and accounts for 32 percent of GDP. The African Center of Economic Transformation (ACET) suggests focusing on the entire value chain of the agriculture process and change the outlook from daily activity to a commercial one. Agribusiness can create the quantum of jobs for Africa’s youth.

As per World Bank, despite Africa’s large uncultivated arable land resources, over half of the global total, the continent imports roughly $30 billion in agricultural products every year. About a quarter of Africa’s population is undernourished. Ironically, the majority of these are the smallholder farmers. Linking agricultural production to value chain and trade can contribute to poverty reduction.

With over 16,000 tonnes perishables shipped overseas per month, Kenya is the leading exporter out of Africa in the perishables segment. Kenya accounts for nearly 38 percent of cut roses sold to the European Union.

Kenya Airways Cargo, the flag-carrier airline of Kenya, is expanding its cool chain facility to deal with the extra perishables demand during peak seasons, in addition to expanding its warehouse.

Panalpina, a Swiss-based global supply chain solutions provider, has made a strategic acquisition in Kenya to expand its perishables network. It has doubled its cold storage space at Nairobi’s Jomo Kenyatta International Airport as it looks to grow perishable volumes from Kenya. This has increased jobs for locals as well.

On the other hand, Ethiopian, the largest cargo operator in Africa, has inaugurated a $150 million state-of-the-art cargo terminal at Addis Ababa international airport, which has positioned the carrier to handle all perishable products based on their temperature requirements.

Multi-modal infra growth
As per the United Nations Conference on Trade and Development (UNCTAD), 40 percent of African goods exported by the sea in 2017 comprised of crude oil. UNCTAD also pointed that “the EU remains Africa’s major trading partner although its share of trade has declined from about half in 1995 to one-third in 2017. A spokesperson from Hapag Lloyd, a Germany-based shipping line, said that the business is booming in Africa, with a young population expected to double by 2050. With such growth comes better development and trade. Hapag Lloyd recently opened an office in Ghana.

Ghana’s Port of Tema will soon be able to handle 3.7 million TEUs a year, after its expansion. Meridian Port Services (MPS), the joint venture between Bolloré Transport & Logistics, APM Terminals and the Government of Ghana through the Ghana Ports and Harbors Authority (GPHA), has drawn its first $100 million from the $667 million project financing package arranged by the IFC, a member of the World Bank Group..

African ports need to accommodate larger vessels and ensure adequate cargo handling equipment is in place. Bolloré Transport & Logistics plans to invest the US $496.3 million in the second terminal at Port of Abidjan that will partly be financed by Maersk. Expected to be operational by 2020, the new terminal aims to boost the capacity by around 15 percent from its current roughly 1.2 million TEU. Asta-Rosa CISSÉ, General Manager of Abidjan Terminal, Bolloré Transport & Logistics, said, “In sub-Saharan Africa, the logistics cost of imports and exports is about double the world average. The reason for these additional costs is the lack of economies of scale and the poor infrastructure along corridors. Designed to promote regional transshipment, the port of Abidjan will become a leading maritime hub. By operating mega-ships, the Port of Abidjan will have the effect of dragging down freight rates.” 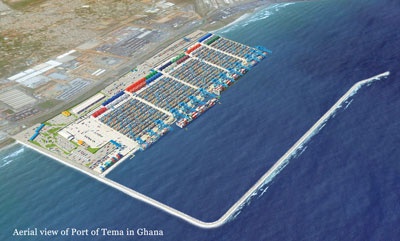 Africa’s intercontinental trade is dependent on ports and shipping services, as one-third of its countries are landlocked. Combinations of public and private investments, port reforms, and improved transit to connect to neighbouring landlocked countries have helped Morocco, Egypt and South Africa to become leaders in African container shipping.

Intra-Africa trade makes up only 16 percent of the continent’s total, compared with 51 percent in Asia. It takes a substantial amount of time and money to cross borders and trade because of the poor logistics and transport infrastructure. African free trade zones and the removal of tariff barriers are essential for efficient cross-border trade. This is currently being implemented in Nigeria and Kenya significantly. Last year, Djibouti launched the first phase of Africa's biggest free-trade zone. In 2017, Djibouti unveiled three new ports and a railway linking it to landlocked Ethiopia, as part of its bid to become a global trade and logistics hub.

Another remarkable contributor to efficient cross-border logistics is the Busia one-stop border post (OSBP) that has resulted in a reduction of border crossing clearance time by an average of 80 percent between Kenya and Uganda. Since the enactment of the East African Community One Stop Border Post Act, 2016, 13 facilities have been set up across the region.

With OSBP, passengers, cargo and vehicles have to stop only once to process border crossing formalities in order to exit one partner state and enter the other, avoiding duplication of efforts.

Around 85 percent of Africa’s internal transportation is still undertaken by road. Hinterland connectivity by multimodal transport and inland transport is slowly falling in place.

Logistics and infrastructure facilitated by investments and digitisation are continuing to transform the lives of the 1 billion plus inhabitants of Africa, but it needs to speed up to meet the current population's requirements and also that of the forecasted 2.5 billion by 2050 (26 percent of the world's total).