Happy May! Is it fall or is it spring where you are? Past peak foliage in most of Australia, IIRC, but mayve a few lingering red leaves.

Did you know Australia has only one remaining (or known) deciduous (leaf-falling) tree? it's the fagus, or "tanglefoot", tree, AKA the Australian beech. It's found on Tasmania (yes, that's part of Australia) and is so commonly at shrub size that it impedes hiking ---- hence the nickname "tanglefoot".

In similar vein, the greenbrier of the Appalachians is often called "Cuss vine" or catch-claw, by old-timers. The thorns are flippin' wicked. Roses have nothing on that stuff. I'd sooner grab roses with my toes.

She has a mild eye irritation ---- was an angel at the vet, even allowed examination of the third eyelid (yes, I know it is called a nictating membrane) etc. , no issues.

AT HOME.... as we were wrangling her gently into her carrier, she peed all over my husband. Then got her paws through the grated opening and started slamming it with her paws. but at the vet, she was "an angel". Yeah, right. They got the angel. Anyway, the ointment isn't a big deal. She's already healing, and I just have to get it on her eyelids.

Mind you, the *vet* can peel her eyelid back, but when I tried? Betadine was required, and I may or may not develop a nasty infection around the wound in my *neck*. Rear claw caught me as Dahlia decided to defy physics by way of my biology. Ow ow ow.  Yeah, I'll just fdo the "easy" way. (When she's asleep, gently smear it on the eyelids and run before she wakes up all the way.) 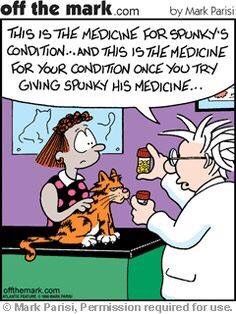 Miki26 05/01/2021
Morning Leo, I’m glad Dahlia doesn’t have anything serious. And it’s actually really common for cats to act completely differently at the vet. When they’re out of their element, all bets are off. Koshka is the opposite...most adorable and sweet kitty ever at home, and a feral beast who needs drugs to be handled at the vet. People try to assure us all the time that their aggressive cats are wonderful at home, as if it’s a reflection on their competence as a cat owner, and I always tell them about Koshka. Every cat reacts differently to stress, and it has nothing to do with how they’re cared for. And giving her eye meds while she’s asleep is a great idea. Also try to position yourself behind her instead of in front. Helps to keep her from running off and it puts you further from the teeth and claws. We had an outdoor cat when I was a kid who came in with a severe eye injury-kept the eye but was permanently blind in it. I remember being the one wrapping him in a towel so my mom could medicate his eye without bleeding. I was nine, and apparently the best option. Although he was not an angel at the vet. Anyway, I hope you can shoo your worries away. Hugs

I finally slept! Took til 9 pm (from 2am), despite multiple attempts and severe fatigue. I’m not kidding, this pain was worse than anything I’ve felt with fibro before. And I have a high pain tolerance-jogging for 3 miles with a sprained ankle, working a couple months with a broken wrist that wasn’t braced or casted, etc. But my body finally needed to crash I guess. The pain is marginally better today... I can touch my face and wear clothes that actually fit me instead of things that nearly fall off but don’t touch my skin as much. Any movement or anything more than a very light touch still hurts pretty bad. Unfortunately I need to go grocery shopping (only need a couple things) and at least do a little planting. Will stick to the areas that don’t involve digging around tree roots and rocks. I have another errand to run but might wait til tomorrow. Those things are all I’m gonna make myself do today. It would be nice to get some burning done but that might not be realistic. At least my skin isn’t terrible...there’s still time before I can believe it won’t be though, it took several days last time. For now though I need to get some food and basically hope I survive the rest of the day.

Leo 05/01/2021
Miki, HURRAY SLEEP! Yeah, I always come in from the least-pointy ends on cats. Didn't help. When she turned into Demon Dahlia, I was just a way to get into orbit, LOL.

I hope you feel better. I hate days when even clothing hurts. My weather will be see-saw this whole next week, so the fibro will have me trying to figure out how to be a nudist, I suspect.

Miki26 05/01/2021
Ugh, that sucks. It would probably be so much worse from in front of her, not that knowing that helps. Unfortunately our weather is going to do the same thing and I really need this to improve enough for scrubs with a real waistband. Doesn’t matter around here but I don’t really want to scar my coworkers for life. I’m glad I chose a career where I don’t have to wear dress clothes though, that was smart

idajoy 05/01/2021
Good Saturday, all. Leo. Glad Dahlia is going to be alright. The medicine will be tough to put on. I hope you don’t get hurt more.

Miki. Yay for the sleep. Mine has not been going well. Probably the prednisone. Hope the clothes get easier for you to wear. That pain has to be horrible.

I’ve had a weird kind of day. My thigh nerve started hurting and it scared me. But I was told yesterday that it will probably be around November before my nerve is healed. That made me rather sad at the reality of this situation. This afternoon my spirits are better. I think this will be an up and down thing throughout. Glad I have a good DO, psychiatrist, and therapist. Along with my PT person here at home. Take care everyone.

Thea98 05/01/2021
hi all and happy weekend! My new meds are making me so sleepy which isn't ideal for the middle of finals, I had a big cry and my partner about it and about being sad to graduate and leave all my friends in this country when I return home. But afterward, we went out shopping and I got a new sketchbook and I'm so excited to use it when I get some energy. The change into summer from spring always messes with my energy too, my body hates change, as is the fibro way

Fantod 05/01/2021
Late check in. I have been around and reading. I started put out too early and as a result pretty much collapsed late this afternoon for a couple of hours. Worked on genealogy, chores, prepping for dinner and a pick up load of laundry. Waves at everyone

AngelaJo 05/02/2021
Finally crashed last night after only having 1 hour of sleep in 35 hours. Was asleep by 8 pm only thing is then im up at 2 am yesterday went to town with mom we spent 4 hours running errands. My mouth pain is much better i only get mild pain when the motrin 800 wears off. i am hurting from shopping yesterday but its worth it to do something normal friday night was so hard on me i could not get my mind off dad and kept breaking down and missing him so bad. i wanted to cut but didnt i went on the AA chat all night long to keep from doing it

Miki26 05/02/2021
I slept poorly again...couldn’t fall asleep as early as I wanted to because I had a lot of pain from overdoing it. My mom texted me yesterday asking if I can let their dogs out and feed them this because they’re going to a surprise party. Which is sure to be maskless with people close together. Because I have to do that I did my errand yesterday against my better judgment. It’s supposed to be 70 today so I got the rest of my planting done early and I have cooking going now. Thankfully don’t need much because I still have some leftover Thai food, their portions are huge. Not complaining there. I need to walk Miki, make lunches and finish some laundry still, then take a nap probably before I go to my parents. Maybe I’ll see if bf wants to meet me at the brewery on my way home, maybe have a quick beer and then not have to go anywhere else. I wish I wasn’t completely useless on Friday. How did I have a 4 day weekend and end up with *more* to do on Saturday and Sunday than usual??

AngelaJo 05/02/2021
Just got a call that Matts uncle he was close to passed away last night. dont know how or anything yet :(

idajoy 05/02/2021
Having a tough time this morning. Depression and pain concerning my saphenous neuritis. I have no doctors helping me that have seen it before. I’m asking my DO to help me find a doctor that is familiar with it. I’ve been reading up on it and there are injections and even surgery. My healing could take years. This is tough and depressing. I will need a lot of support from my psychiatrist and therapist. My PTSD is hitting from the day my husband brought me to the surgeon unable to walk and in a wheelchair. He told me I needed to get out of the wheelchair and get to work on my knee. I couldn’t even walk. It reminded me of my dad abusing me and telling me to stop crying and suck it up. These memories are all coming back. I was severely traumatized by what happened. Sorry such a downer.

Happy May! I like the month of May. My sons Birthday is May 4th. He will be 25 yrs old. Time has gone so fast .

I am still having allergic issues from the 1st vaccine and not able to get the 2nd one.

Big soft hugs to all.
Join the Conversation
Posts You May Be Interested In