Running late today but here's what I rolled over and saw.... Yes, that's a cat. And, yes, she lets us pet the tummy. She demands it, in fact. So, yeah, she's weird.

Interesting fact: I have a black cat, which is supposedly bad luck in many Western cultures BUT in Germany, tortie cats (like the one below) are called Gluckskatzen ---- lucky cats! (The u in that has an umlaut.)

Why do they get these markings? Well, think about the fact that in the wild, most wild felines have stripes or spots. Camo! Most domestic house cat markings can serve as same, although tabby-tiger markings are the default ---- just as in dogs, a solid coat is BAD!

CAMO! If you look at wild canines ----- foxes, hyenas, wolves, pick one ---- most follow something called "Thayer's law" ----- darker fur on top, lighter on the belly. When they lie down, they are harder to spot in shadows against the usual background of their territory. Red foxes, FYI, blend in great against forest floors of deciduous leaves from *last* fall, and often are a combo fo red and grays ---- sorry, Disney! no, a fox ain't red tip to toe. In fact, th ered fox can be amber to black in coat, on the same fox, as I can attest, having seen several in teh wild.

Wolves, of course, are generally gray ---- b/c they're often in forest and tundra, and shadow is their friend. Hyenas, like many animals in Africa, can be spotted or striped. Dingos? Yep, not solid. Dholes of south Asia? Nope, not solid all over.

Why? Colors we see in domesticated animals are bad in the wild. Solid colors, particularly. Unles sit's winter in the arctic. And arctic foxes are only white in winter. 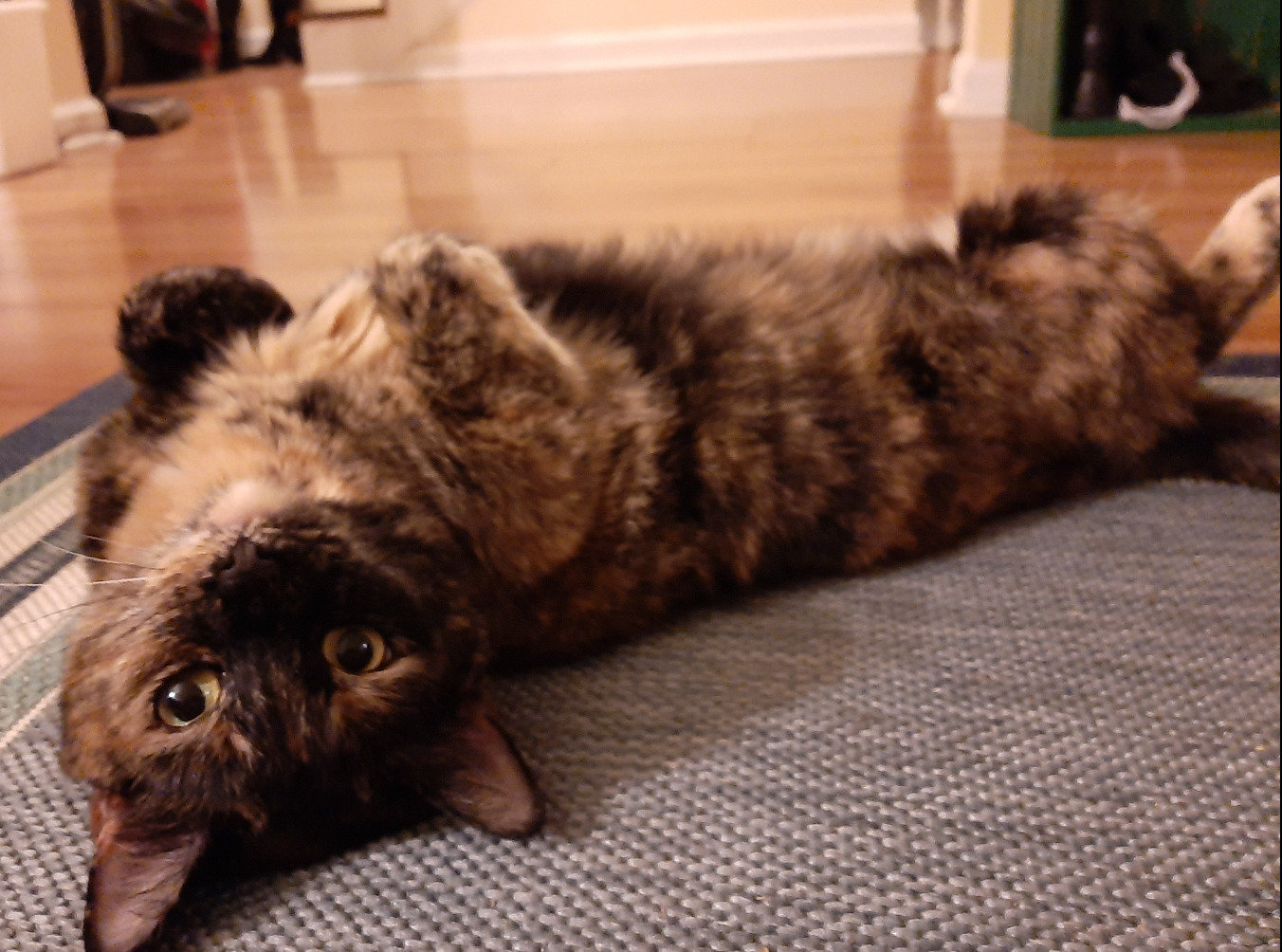 What a pretty kitty! I can occasionally pet Archie's tummy, but then he nibbles. We call him nibblepuss. But he purrs the whole time.

Another day and I keep wondering how much worse things can get. I feel terrible, in horrible pain, and I think I'm going to cry. Work is also terrible; I have too much to do and no ability to focus, and <sigh>.

I have an appointment in a little bit for acupuncture. I don't want to go. There's too much work, and I can't get caught up, and I'm tired of everything being in crisis mode. I think I may have a breakdown, and you know what? So be it. If it comes, then I can pick up the pieces and move beyond it.

Wish you all a restful day.

idajoy 05/05/2021
Love your cat color story this morning Leo. I love all cat colors, but I am very fond of the Siamese. But all are lovely if ask me. Your picture is very cute. I’m going nuts with stuffed animals for myself. I need them as I don’t have a real pet. This morning I ordered a Siamese. Now I will have that and my Australian Cattle Dog. Honestly they make me feel better.

ZK, I feel so badly that your heart is hurting so much. I’ve had many breakdowns over 35yrs time. Sometimes then you get the help you need. Try to find a therapist to talk to.

Well, my severe nerve pain is back in my thigh. It started on Sunday and now is hurting so much. I almost fell both yesterday and today even with the walker. My DO thinks it’s because of the taper on the steroids. Just goes to show the nerve is damaged. Just have to wait until May 24th to see the specialist. My husband things I will be in my wheelchair by then. I think he’s right. My physical therapist is coming today. I also have a virtual appointment with my psych therapist this afternoon. I really need that.

Leo, what a cutie! I have always adored all black animals. My first love was a black lab. We had a few since then and each stole my heart. When we had horses, there was a black stallion named Renegade, absolutely stunning that was at the farm where we boarded our horses. We bred Tozanna (Arabian) with him and the foal was chestnut in color with a star on his forehead.

And if anyone ask me what my absolute favorite color is. It's black. I like other colors well and good, but it all goes back to my first love.

I also think we have had just about every color of cat you can come up with. We always had two cats around and it seemed like one was always getting out and well, we lived 200ft from a 50mph highway.

Zombie. You're approach is similar to mine. I keep afloat until I sink. And when I do, I just float again. Rinse, lather, and Repeat, over and over again.
I have felt close to that break down before. Somehow I have managed to stay away from it. I pray you avoid it also.

Ida, I am so sorry the pain is returning. I wish you could continue with the steroids a while longer until you can see the new doc. Is that something your current physician would allow??
And I too have been thinking of getting a replica of Tank. I still miss that big lugnut.


So in the idiot chronicals here, I ordered rock for around the pool and yardscapes. Then we went to Menards to gets some edging. I didn't care for it too much so last night we went back and I got the edging I really liked. The problem with that is each one is a 10lb brick. I ordered 75 of them.
We had to load them into the truck and then unload them out of the truck.

And while I really want to get this project done, I think I need a few days to just recover from it all. But when it is done, it's going to look nice. I went with curbstyle brick edging.

We also had a frost last night. So in came all of the plants minus the ones I planted already. Those got my flannel sheets last night, LOL. The cats have loved the ferns. A few flies came in with them last night and Hinckley and Oakely are enjoying their fine dining. (blech - silly little fly breath kittens).

Well, I better get going. Dishes need to be done, laundry to launder....solve world peace, and grow some plants.

Miki26 05/05/2021
Hi Leo, I love the picture. Technically everyone but Nox would have some amount of camouflage in the wild. He’s mostly black and the others are orange/brown tabby and dilute tortie. Mikis coat color actually comes from dingoes, they were bred with certain breeds of domestic dogs and Australian cattle dogs are the end result. They also do look somewhat dingo like, people have said Miki looks like one and I always say she kind of is.

Today has been rough. I didn’t sleep as much as I needed and it’s cool and rainy. Still feeling the after effects of the vaccine and pms and IBS. And anxiety... I feel like I’m constantly in fight or flight mentality. This morning was also crazy, and I would have been able to leave early but my coworker called out. Someone came in for a few hours but that was all she could work-which I’m fine with, I wouldn’t expect her to stay so I can leave early when it’s her day off. But I really wish I could go home and take a nap. I also could have picked up my car, they texted this morning that it’s ready. They close at 5 so I’ll just get it tomorrow instead. Sadly it’s going to be the full $500 deductible instead of the $385 estimated :( I don’t need this right now, and I want to find out if it’s all repairs or if some is the rental car...my guess is repairs because they’ve always grossly underestimated repair costs. Sucks either way though,that money should have gone towards redoing my kitchen, not fixing something I didn’t break. I should get off here and finish a couple things before I sit here and wait for 5:00. I’ve been working on this for a couple hours so I probably missed a ton of people, will try to check back later

Fantod 05/05/2021
I'm on the better late than never schedule today. I got up early (for me) and washed my hair. That is always a bit of an ordeal between washing and then drying it.

The medication that my foot surgeon ordered for me arrived by courier today instead of US mail. I guess *maybe* the lab figured out that I was a tad annoyed and in a fair amount of pain with my feet. I never yell or carry on; I guess they caught my meaning.

I had another HVAC guy out here today. Highly rated, family owned and operated. Definitely old school and quite the talker. The quote from them is astoundingly much less than the first one. He cut me some slack on pricing and parts. I have one more to go and then I can speak to my family.

Leo - I love candid photos of cats. They are usually adorable like yours.

Zombie - I hope that you can hold on and work through all of the things that are bothering you. I hear you loud and clear on crisis mode. I've been living that same *dream* for over a year now. Hugs!

Ida - I am so sorry that your nerve pain is back with a vengeance. I really wish that something could be done sooner. No one should have to live like that.

Wonder - Are you kidding me!! Carrying all of those rocks. We call flies "sky raisins" around here. They make for a lot of hilarious acrobatics when one gets in the house. I hope that you aren't too sore from all of the lifting and carrying. Take it easy!

Miki - I am having a better day in the anxiety department aside from a couple of moments. I wish that you were too. I'm sorry that your estimate was not correct. That's so frustrating. I sure hope that they did a good job. Fingers crossed that you get some restful sleep tonight.

Shout out to Milily, PainedOne, Blue, Autumn, and Puppy Mom.

puppymom06 05/05/2021
Hello everyone. Typing this on my phone so sorry if it's short. Things aren't good here. New rheumy sees my joints are swollen but has no diagnosis. First she says fibro doesn't cause swollen joints then she says maybe it's the fibro because anyone with chronic migraines has bad fibro too. ? But I can't take Lyrica so there is nothing that can be done. She is clearly going through the motions and not really trying.

Meanwhile I have purchased my first cane at the suggestion of the neurologist NP because I can hardly walk due to the swollen painful joints. I haven't used it in public because I hate it. Also I am not coordinated with two legs so adding a third didn't help. ;)

I get up at 5:30 AM so I have time to run the pups for an hour before work and don't sit down until 10 PM became we have a one hour evening run. At least, since the night I had to crawl up the stairs because of the pain, my husband is helping more.

I have been told again to do yoga and take Tylenol. I hate yoga, I have tried it. I have a home gym
Fix what it wrong so I can go lift weights and spend 30 minutes on my elliptical will ya?
Join the Conversation
Posts You May Be Interested In