We now have 10 pounds of oatmeal.

Today in 1885, the shoe lacing machine was patented. No joke, there's such a thing. Jan Ernst Matzeliger of Suriname scored the patent, and thanks to that machine, mass-produced shoes could be laced by machine, not hand. This made footwear more affordable. Matzeliger is among many forgotten pioneers who happened to also not be *white*.

In 1995, terrorists attacked Tokyo with sarin gas, as part of their doomsday cult beliefs. Twelve deaths and over five thousand injuries/ailments occurred. Sarin, btw, is a nerve toxin. You can derive it from castor beans. If you work reallllly hard at it. Which you shouldn't. B/c, obvs, hello, nerve toxin bad!

Why do we abbreviate pound as lb? Back in the medieval era, a pound was termed "libra pondo" (pound weight) in Latin or so the story goes. How the p beacme a b remains unexplained... Hmm.

A hashtag # is actually termed an octothorpe. To give you an idea how we may have got from lp to lb to a hashtag for "pound" in English measures? This pic of the lb abbreviation as written by Sir Isaac Newton. And my mom better never criticize MY handwriting again! 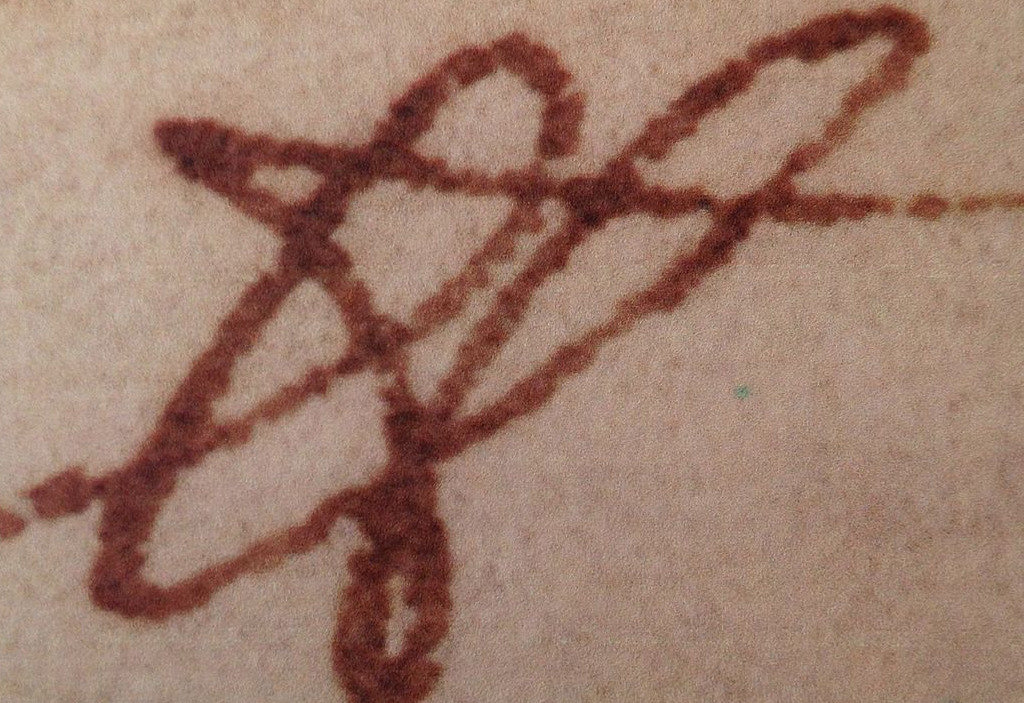 WHy so contagious? Humans never had it before. Our immune systems are all like, "WTH? What's this? Hey! Get outta here!"

There's this cool thing called an R-naught that basically measures how many people will catch a disease from one person who has it. Zero is your ideal (thus, "naught", from the old time "nought", = none, not, zero).

MEASLES is R 12 to 18.
Covid... 2 to 5 (Similar to its relative, the original SARS.)
So, one person with Covid 19 can pass it from 2 to 5 people, but one person with measles can, in an unvaccinated population without herd immunity, give measles to 12 to 18 people. (Think of the measles effect on Polynesia ---- devastation was immense.)

So let me repeat, the R naught value applies in situations like this: A population without any immunity b/c it never encountered this virus before. Smallpox hits the New World, for example. And that's got an R naught of 3 to 6.

The term "R naught" is being tossed around lately. Thought it best to explain a bit what it is. Cheers!

Leo, you can make a lot of oatmeal cookies with ten pounds! lol

Another busy week and I'm ready for a quiet day today. Had to take dad for an MRI yesterday and that turned into a boondoggle. Did finally get it done, but had to go from the outpatient center to the hospital and then wait for them to work him in. Everyone was pleasant and apologetic about it. Just made it a longer day than I thought it would be.

Hoping everyone has a good day!

Miki26 03/20/2020
Morning Leo. Hopefully you guys actually eat oatmeal? If so, at least it's shelf stable for a while. I've actually wondered why pounds was abbreviated like that before lol. I hope you manage to have a calm day despite everything. Hugs

I'm exhausted today, and for right now still working. I'm hoping I can leave a little early. I didn't go to MA last night because the husband has pretty bad asthma, so we figured it was better to minimize the amount of people coming in contact with him, but they did offer to continue paying me, which is nice of them. We've got rain again today and I think it's supposed to stick around for most of the day. I'm already hurting a lot from stress and exhaustion so this rain really sucks. Also my left leg hasn't felt right all morning...I've had varying levels of numbness for several hours now. It changes if I'm moving around at all, doesn't have to be running or bigger movements. I wish there was a way to address this but unless it somehow becomes emergent, there's no way. And apparently we're switching to not letting clients into the off now. I'm sure people will be annoyed by that but oh well. I just don't want to deal with people at all today, I had a lot of nightmares and my anxiety is still high. I'm physically and emotionally exhausted...


Just found out our GP's office is changing procedure... You have to text them from the parking lot to announce you've arrived, wait to be signaled from the door, then go in the *side* door where you will have your temp taken, asked about cough/fever, and =THEN- all being well enough, you can go see the doctor about whatever.

And they're only letting two people in if one is a parent with a child underage.

Well, Hubby's gonna hate that. He hates getting blood drawn and guess what he's going for today? Yep. He has to fly solo on the blood draw. Oh boy.

Maynard30 03/20/2020
Good Morning All, Leo I feel you on the achy, we are getting crumby weather here in PA too and it is killing the body about now. Oatmeal cookies sound wonderful! Oatmeal sounds better than the huge tub of cheesy puff balls mine bought LOL.

It has been a few days... In that time, my Aunt with whom I was very close passed from bleeding out due to an aortic aneurism which she went to the ER twice in the 2 days prior for and they dismissed her. Now she is gone. I couldn't fly to her funeral with my family in AZ because of this stupid virus. She was the caregiver for my grandmother and was helping my dad who has MS. As a result, Phil and I will be moving out there by end of October latest. PA is closed down from COVID-19, all non-life sustaining businesses are ordered closed. The weather has me in a ton of pain.

Pained it is good to see you.

Miki I'm sorry to hear your leg is bothering you and you are still working. I hope you get to go home early.

Sending hugs to all...

AngelaJo 03/20/2020
I am needing a break from the virus crap right now :( There has been a death in Wisconsin in fond du lac and thats where my family lives.

Pain is so high i know stress doesn't help. Matt is going to the dentist on emergency he broke a tooth glad they got him in. I am nervous about him going out but they take precautions there. Only emergency dental in Michigan now

Leo,..LOL, once upon a time my hubby decided "lets make overnight steel cut oats in the crock pot.". I said "Why sure babe, that sounds good". and off we went.
Then a box arrived. It was heavy.
Later that night at dinner...

"So, babe, why did we get 9pkgs of steel cut oats?"
His reply, "Because I wanted free shipping".

If your searching for some steel cut oats...we've had plenty for months now.
Hope your hubby's blood draw goes well today. They nearly have everything here on complete lockdown.

Pained, sorry you had to deal with that kind of day yesterday. Hopefully everything can get back to peaceful again.

Miki, I join you in the anxiety/nightmares. I had strange ones. Freaky, don't want to ever have that kind again, bad horror flick kind.
My tornado dreams are coming back also. (when things are out of control for me).

I wish too, that you could get into a doc who knows what is going on with the numbness. Maybe you can take this time to research some specialists?? You live out there in an area with great medical care, you would think that you could find someone?


Angela, Kinda the same here, only emergency personnel to be out at this moment. That includes grocers. Dentist offices are closed unless dire emergency, it's a ghost town.


I've been swamped here. So many of my friends struggling as they have suddenly become homeschool moms, some while trying to work. So I've been drafting schedules and helping with resources. It's hard for parents to know that most elementary aged kids only need 1-2 hrs to complete their school work. Middle school....2-3hrs and highschool up to 4hrs. Yet they believe since the kids are gone from 8am-4pm, that they need to fill that time in.

So I'm trying to help coach these mommas.

I just wanted to check in. Say hi, see how you all were holding up.
My anxiety has been high due to being overwhelmed. Shopping here lately has been a crap shoot. So I feel like I have over purchased. I plan to take stock of everything, organize and then plan my meals that way.

I better get back to things here.
Hugs to all! Stay safe out there guys. This little Corona Crud is a nasty bug!

First full day of spring and the wind chill is 26 degrees. I just had some hot soup to warm up.

Heading to go lay down in bed for a while. My sleep was disrupted from high pain in the left side of my head and left eye (from the 2 concussions).

Increase Anxiety and stress is wearing me down some.

Maynard - sorry about the loss of your Aunt. That ER failed her.

Wonderbaby 03/20/2020
Maynard, I'm so sorry to hear the news of your aunt. How horrible! I pray for you and your family. And for the transition you're about to make.
Join the Conversation
Posts You May Be Interested In