so, finally have thepix of Hubby's October cake (covers birthday and Halloween).

There is a pair of Levi jeans still in great shape, from 1879, in a msueum. No kidding.  You could still wear 'em, probably.

The 22nd amendment means you can't run for more than two terms as POTUS, which was brought about specifically after Franklin Delano Roosevelt, who was up for four terms, but died early int he fourth term. By 1951, term limits were in place. Ironically, the first president affected was Dwight D Eisenhower, whose political party opposed Roosevelt's.

To make best use of melatonin as a sleep aid, don't just take it in a dark room ---- already be in the dark room for ten minutes before taking it. Tip from the nerd. (Melatonin won't help you sleep if there's lights on.) And relax if it takes you half an hour to fall asleep. While 10-20 minutes was nomral, in the 21st century, 30 minutes is not abnormal.

There are two kinds of marzipan. One is soft and workable; the other is also workable, but has to be baked, and is even more fragile. The kind I use will air-dry over days, becoming brittle, but is yummy. And easier, frankly.

That last leads into: Hubby's cake. he asked for "weird and creepy". I think I deliv ered... Sides are covered in tombstones shaped like skulls (marzipan) or chocolate I molded and spattered to look like rocks (and ate any mistakes!). BOO?

Yes, I know. The front steps broke off (fragile) and Hubby took the cake out  of the fridge and let it drop to the table like it was a brick. Yeesh. 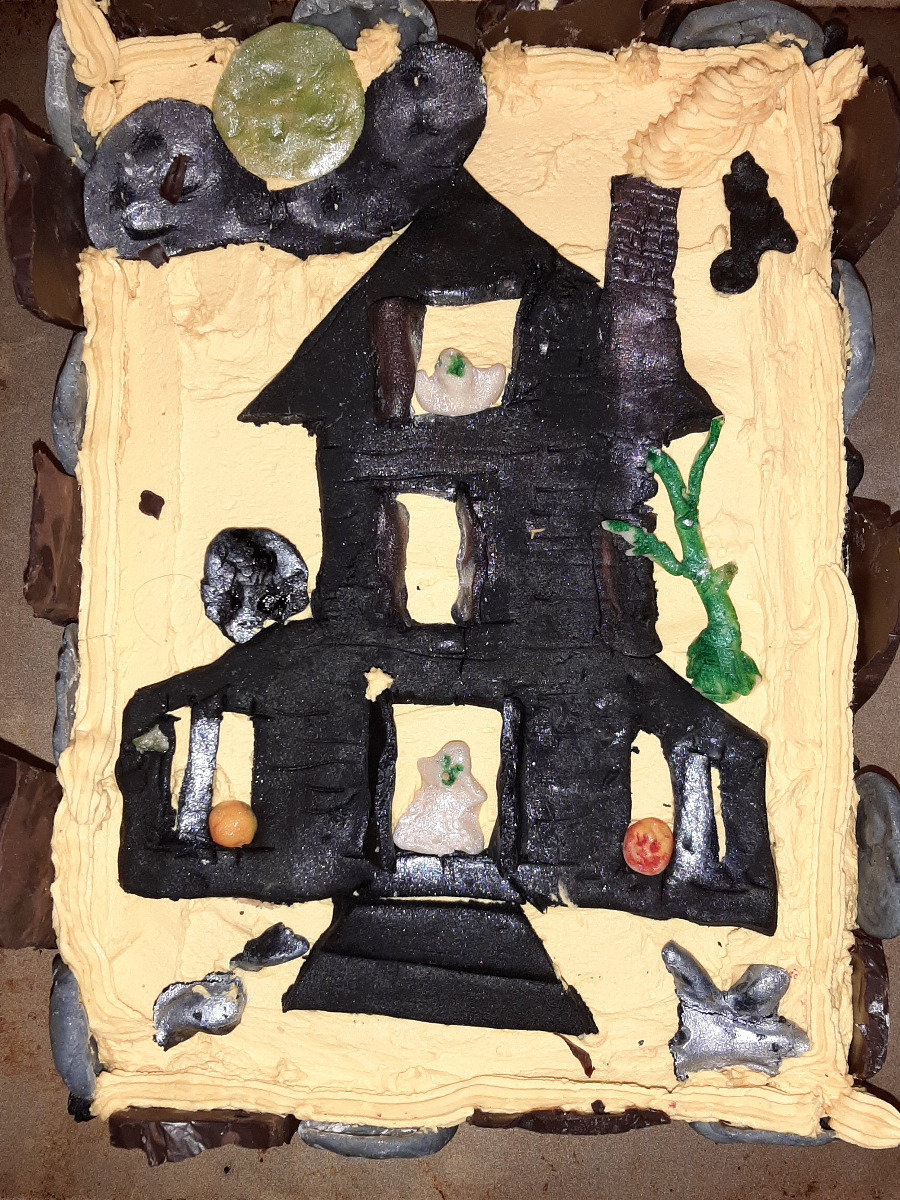 Miki26 10/08/2021
Morning Leo, his cake looks good, and I’m sure it tastes just as good. I’ve never really had good luck with melatonin. I can be up for hours after taking it, and then I have a “hangover” in the sense that I’m even more tired and out of it the next morning. But I tend to get weird effects from drugs.

I’m not doing well mentally today…just really struggling to get my shit together before work, and then end up rushing and worrying that I’ll be late, which is from anxiety but then creates more anxiety. I also realized that the piece I’m working on for the Instagram contest is actually due this weekend…I mixed up the dates with another one I considered doing so I need to finish it by Sunday night. Yes, it’s stupid that I’m so focused on finishing something completely unnecessary, but I want to feel like I actually have accomplished something on time. Then I guess I’ll go back to commissions since I’m working so slowly and need to get shit done. I’m also feeling really depressed about my financial situation…I’ve got one card paid down but still have 2 more that have only gotten higher. I already started on some Christmas shopping because I know I need to spread it out, plus my mom and my sister (and obviously me too, because twins) have December birthdays. Since I can barely get commissions done I’m not sure I’ll be able to do that for gifts. And finally, I’m always more stressed out and depressed during the holidays and I’m really dreading my mental health declining even more.

idajoy 10/08/2021
Leo, I think your cake is great! Very spooky. I’ve never made marzipan. I wouldn’t have a clue how to begin. Of course hubby has done all cooking and baking because of my ailments for about 1 1/2 years. Maybe in about 6 weeks, after my OT is done, I’ll be able to cook again. I used to work for Levi’s, by the way. One day a man walked in and said he wanted to buy some jeans. He asked me a ton of questions and fortunately I knew the answers. Come to find out, he was a Levi’s secret shopper. I got the highest score anyone ever had in that store. My manager said she was sure happy it was me and not one of the college kids. I was quite proud. What can I say.

I just had a virtual appointment with my DO again this morning. He is upping my gabapentin. And sending me to physical therapy to have that maneuver done to see if my crystals are out of whack. All of my leg pain, neck pain, headaches, he’s hoping is a goofy fibro flare. But he’s not going to trust that and is going ahead with the Lupus and MS testing. I love this guy. He never attributes everything to fibromyalgia.

I’m going to do something funky today. I’m going to get a haircut and have emerald green streaks added as well. I’m not telling anyone but you guys. My hubby is going to be shocked. He will get over it. I’m doing things to give me life again. I’m very excited about it.

Tonight we have the 9 yr old and 4 yr old grandkids overnight. I love it when they come. Both of my kids and their spouses have done a wonderful job raising their kids. I’m such a bragger. Sorry.

Tomorrow is my littlest grandchild’s 3rd birthday celebration. He will be so excited.

idajoy 10/08/2021
Miki, please get some help both emotionally and physically. I’m very concerned about you.
I understand December being a huge gift month. My DIL and 2 grandchildren have December birthdays, plus all of the Christmas gifts. My credit cards don’t look so well either.

I have PT later which will only make things worse. Now that we are on to the subject of Christmas - I'm cancelling it this year. I will probably try to do something for my nieces and that will be it. It's been a very hard year financially and the added stress of that is just not needed. Like everyone else, I have a credit card that needs to be paid down/off. Twin, who LOVES Christmas probably already has her tree up lol.

Leo - Your cake looks delish and very spooky. Eating the mistakes is the best part of baking. I hope that Mr. Leo is feeling better today.

Miki - Deep breath and one thing at a time. It's hard to focus when your body and brain aren't working right. Like Ida, I am very worried about you. I hope that your day at work is tolerable.

Ida - Having your hair done is always a pick me up! Getting some green added in is a brilliant idea. I'd like a picture of Hubby's face when he sees you. I'm so glad that your DO is really determined to get you to a better place medically. Enjoy your adventure today and the grandkids later.

I have laundry working and a couple of other things to do today. Shoutout to AngelaJo, Twin, Autumn, PuppyMom, Milily, Zombie, Wonder and Blue.

Fan, one step at a time.

Hugs to all who are lurking. I'm off to fight disinformation. Wish me luck! ....

It has rained and has been very humid every day for days now and it is killing my body and making my allergies worse.

I am a mess from going to my Dads yesterday. I ended up being there 4 hours because of a long story plus travel time. He was being extra impatient about everything and anything and the last hour I had to restrain myself from telling him to f**k off multiple times. I felt like I was around my ex husband. My pain is so bad from my back down thru my toes.


So many baseball games on today and tonight. The playoffs.
I am just hanging around watching baseball and taking it easy and waiting for my grocery delivery. I have to run to the pharmacy to pick up meds but is only 1 mile away . Hopefully the extra pain doesnt last a whole week this time,

Leo - I like your cake , very festive and yummy looking.

Miki - I hope you can have downtime this weekend

Ida - I like your DO. Have fun with your Grandkids. I will be routing for your Brewers.

Fantod - I hope your PT wasnt too awful on you. I never do well with PT , except for ultrasound therapy and pool therapy.

Fantod 10/08/2021
Well, I suck. I dragged my foot and took a bad/full face plant fall the family room. No PT for me today. I'm banged up but everything seems to work. I *may* have a cracked rib. Tomorrow will not be fun...

Fantod 10/09/2021
Thank you Miliy. I'm a hot mess that's for sure. I thought that I broke my nose too. I do have a bad case of rug burn on it. My chest is killing me.
Join the Conversation
Posts You May Be Interested In