And then it's American Thanksgiving... 11/26/2020. Which, if you add all the digits comes out to fourteen. That's just a random observation. No reason.

How cute is my cat? Well, she's seen us pull at a door to open it, and so she tries to pull it open. Of course, she can't, but she's very determined. Irony? She can push through it a lot easier. But in her observations of us, it's a pull-to-open. Ergo, she must learn this! Yeah. If she gets thumbs, we are *doomed*.

What's on sale at your local grocery store? At mine? Sweet potatoes and brown sugar. Heaps of them. Eek.

Did you know storing potatoes in the light can cause them to "green"? Yep. They start producing chlorophyll (hence the green color) and a fun little chemical called solanine. Why is taht bad? It's a toxin, and if it covers too much of the potato? Don't eat the tater. Toss it. It's not dangerous in tiny amounts, and if you cut away the green parts, you're typically safe... but if you do get a good dose of solanine, you'll regret it. A lot. The chlorophyll signals the presence of the solanine, which is colorless.

Solanine gets its name from the genus of plants in which it's believed most common: Solanum. Eggplant, tomato, potato, etc. although it is usually in the parts humans nver eat.

The Solanum genus includes deadly nightshade, and decorative plants like winter cherry and kangaroo apple. I never heard of that last one, either, but I'm not from Down Under. Turns out it has lovely five-petaled flowers.

Plants in the Solanum genus are generally noticeable, being flowering, and/or deadly, and/or annoying.

The "wild potato" is in the genus Solanum, and while the tuber is edible, you have to leach out the solanine and then boil 'em, and possibly other things. THe "wild potato" is small, and, yes, related to the domesticated (thank you, Native American tribes!) potato. What, you thought white people did that? Nope. Potatoes in many varieties, without the poison risk, were already under cultivation when the whites showed up in the Americas, as were tomatoes and wild cousins like groundcherry, and maize. Selective breeding and patience... And patience... and patience... The potato went on to become a staple virtually worldwide, or at least wherever Europeans ended up for any long period, and tomatoes are also found all over.

Yep. Italy had no tomato sauces until relatively recently in its history. Ireland had no potatoes. You get the drift.

I have two banged up swollen knees for no reason other than "overdid it too many days in a row" and Hubby isn't around for "heavy lifting" and I do lift with my knees. Turns out, they can't lift heavy stuff either. Well, shit. 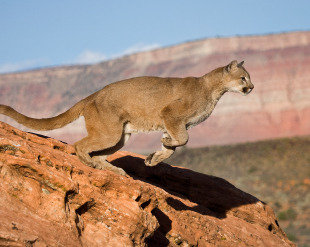 I am calling today a sick day. Between my Stomach with PMS and my gout meds, my pain plus my gout pain i am done for today already. Skipping AA and anything else.

Miki26 11/21/2020
Morning Leo..my sister and I were just talking about everything we've stolen from the Native Americans actually. Came about because I found a book for bf about Native American history from the point of view of Native Americans. He mostly reads historical nonfiction, which is not at all in my wheelhouse, but I found it through a small bookstore my sister suggested. She teaches history so we got to talking. Anyway...if you're able to postpone any heavy lifting by a few days, you probably should. Take it easy as much as you can. That's funny about your kitty trying to open doors...Nox actually knows how to open cupboard doors and goes in his favorites to nap regularly. I don't store any dishes or cookware in those ones. And I love the puma photo..they're such graceful animals. Hugs

Angela-good idea to stay home today, get some rest if you can

I don't want to do anything today...my neck, shoulders and back are really painful...I slept well last night but woke up in an awkward position with 4 cats on me. I don't have a ton of stuff to do, grocery store, quick trip to the post office to mail an ornament to my friend, walking Miki and a little cooking. I guess that's actually a decent amount now that I've written it out. Oh and wood burning. I have 3 ornaments sketched that I'd like to get done this weekend. I'm planning on getting as many done as I can (without rushing and doing them poorly) by Black Friday, and then I'll make a trip to the art store around when they open. As of now I don't have a ton of commissions but I am burning a few gifts for people, so I'm starting those after Black Friday. I hate how slowly I'm progress on that stuff but I don't have a choice, so I guess it is what it is. I also realized another long term effect of covid last night...I made some lamb on Thursday but didn't eat it that night, bought it on sale and figured I'd treat myself, I've made it before and had it in restaurants and have never disliked it, until yesterday. It tasted so gross to me. It was well within the date and didn't look or smell bad so I don't think it was the product, and I can't really describe how it tasted. I had to douse it in barbecue sauce to choke it down instead of wasting it but it was weird. And I know that's a common long term covid symptom...my sense of smell is always a little screwy so I wouldn't notice that. At least it's something I didn't eat much to begin with? Still annoying though, and I hope there aren't other things out there. I do still like chocolate and wine though so I guess I have that going for me?

Fantod 11/21/2020
Afternoon Leo - I stayed in bed for a while this morning. Read the various news feeds that I look at etc. I am just about finished prepping for pizza and salad dinner toni9ht. I have a few other things to do. Nothing terribly demanding. I plan on having a lazy afternoon. Sorry about your knees. I have firsthand experience with it. Ice when you are sitting!

Most of my family left at dark thirty this morning for NC. They are stopping in Baltimore to pick up my oldest niece who is flying in from Cali. Will probably stay in Annapolis tonight. Do I think any of this is a good idea - absolutely not. Neither does my brother. More worry.....

This is probably our last nice day around here. It is almost 50 degrees. I'd say the outside fall cleanup is done. Just a couple of minor things still need to happen. I imagine that the tractor will be switched over to plowing capability this week.

I got my helper over here yesterday to deal with my roses. We were very careful. And, he did not come in the house. His shoes were in tatters and both of them were split along the sole. After he left, I ordered him a new pair and had them shipped. I know they will fit as I bought the last pair a couple of years ago. He never asks - I just noticed. It is criminal how the VA cares for veterans. He needs so much more help than he gets and from his family too.

I had a nice porch social distancing visit with my neighbor too. We've decided to continue our conversations in my garage which is heated but has enough ventilation. Both of us need it and enjoy it.

AngelaJo - Taking a day off for self care is a good thing. You need it. I hope that some extra rest helps.

Miki- I love lamb. Maybe you ended up with mutton somehow which has a very different taste. Or lamb from New Zealand versus Australia - they do taste different. Sounds like you are moving right along on your wood burning projects. I have a pillow embroidery (craftsman style) kit stashed in a closet. I might break that out and start it. Some creativity is good for the soul. Chocolate and wine works for me. I hope that your day is decent.

Off to finish up in the kitchen and do a couple of other things. My partner is on the early shift today. I want to finish before he is underfoot. Shoutout to Zombie, Milily, Ida, Wonder, Twin and PainedOne!

Leo, I hope you can get some relaxation in without a plan. :)

Miki, as long as you still like chocolate and wine, you're good! LOL

Fantod, bless you for ordering the new shoes for your helper.

I didn't do much yesterday and don't have much on the agenda for today. I need to do a couple of loads of laundry. Maybe I'll make a mayonnaise cake today. We'll see how my energy levels feel in a couple of hours.

Hoping everyone has a good day!

AngelaJo 11/22/2020
Hey all, slept from 10 till 1 then was up till 530 then started dozing agian only to have to be up for 7 am since im going to AA and its earlier on the weekend i leave at 9 am. sighs..... BUt i talked to mom for an hour and half at 1 am we were both up and on the 28th when she comes home from her sisters for the weekend shes STAYING home!!!!!!!!!! YAY!!!!!!!!!i miss her so so bad!!!!!!!!!!!! I miss my dad so bad it hurts and i cant even talk to him on the phone heaven has no phone :( Its been 19 days now and i still cry everyday. I never knew pain like this before!!!!!!!!! My gout pain is still really bad but my stomachs doing a bit better so going to todays meeting. Then going to get our turkey and all the trimmings (we have some stuff already) We are going all out even with just being me my fiance and my best friend. My mom said to do the best we can to have a NORMAL thanksgiving and do the normal meal she wants us too cuz shell be having it at her sisters. My fibro is really bad right now i am hurting so bad :( BUT I need my meeting i need the stability right now.

AngelaJo 11/22/2020
Managed AA and Grocery shopping (i got a turkey! Places are running out i guess) and on hardly any sleep and now im done for. Matts cooking burgers for lunch and then im laying down for awhile i am just worn out and my ankle with gout is all swollen up from walking so much. We have snow moving in tuesday and im feeling it already!
Join the Conversation
Posts You May Be Interested In